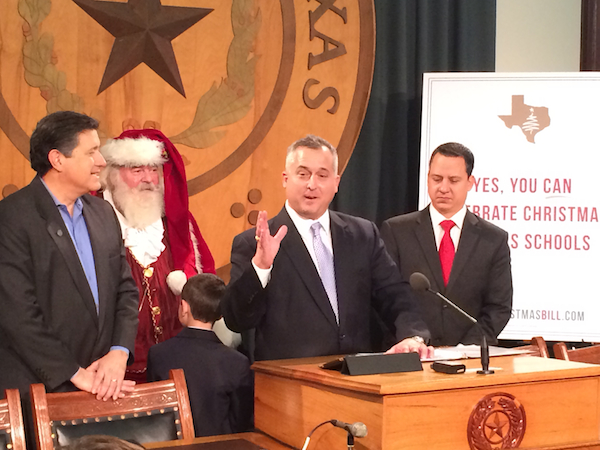 AUSTIN, TX – Today, State Representative Dwayne Bohac (R-Houston) hosted a press conference at the Texas Capitol to raise awareness for the State’s new Merry Christmas law (HB 308) that allows parents, teachers, students, and school administrators to celebrate Christmas and traditional winter holidays in public schools without fear of censorship, litigation or persecution.  Before the press conference, Bohac appeared on Fox & Friends, the Country’s top rated morning news show, to highlight the law and encourage other states to pass similar legislation to stop the assault on Christmas.

“Our school officials and teachers have enough on their plate without having to worry about frivolous lawsuits for acknowledging Christmas in our public schools,” said Rep. Bohac.  “This bill simply offers protection for and guidance to school officials and teachers by codifying Supreme Court precedent and providing ‘bright lines’. This bill ultimately is about bringing ‘fun, joy and magic’ back into our schools during the Holiday Season.”

Joining Bohac at the press conference was State Representative Richard Raymond (D-Laredo) who co-sponsored the legislation, Texas Values President Jonathan Saenz whose group recently launched a statewide ad campaign in support of the new law, and Santa Bill from Lone Star Santas (a statewide organization focused on enhancing the spirit of Santa Claus and Christmas).  Bohac’s son, Reagan Bohac, was also in attendance.  Reagan’s story of decorating a “holiday” tree with “holiday” ornaments and being discouraged from referencing “Christmas” in his local school was the impetus of the bill.  State Representative Pat Fallon (R-Frisco) also attended and shared a personal story of Christmas censorship in his district.

Before Thanksgiving, a PTA email distributed in the Frisco ISD outlined a list of “Winter Party Rules” that stated there would be NO reference to Christmas or any other religious holiday and no red/green colors or a Christmas tree at school parties.  After the email was brought to his attention, Fallon challenged the PTA to drop their rules.  The battle appears to have been resolved over the weekend in advance of the press conference, and Rep. Fallon deserves a great deal of credit for educating his local parents, students, and teachers about their rights under the First Amendment and the new Merry Christmas law.

“HB 308 was signed into law by Governor Perry in June, the heart of summer, and with Christmas right around the corner, it’s important that we raise awareness for this law to avoid censorship of Christmas in our public schools,” said Bohac.  “The situation in Frisco highlights the very problem this bill aims to eliminate.   I’m proud to stand in defense of Christmas and I urge other states to join our effort to stop the overreaction by school districts regarding Christmas and Hanukah.”

For more information on the law, Texas Values, and the Frisco ISD story, please visit: